BTS member Jimin is set to release his first solo album in February, following in the footsteps of J-hope and RM. The singer recently collaborated with Big Bang member Taeyang on the hit song VIBE, which has been dominating streaming platforms. According to a source from BTS’ agency BIGHIT Music, the release schedule for Jimin’s solo album will be announced once it is finalized. Fans, known as ARMY, are eagerly anticipating the release and speculating about possible collaborations based on recent social media posts. More information about the album will be revealed in the coming weeks. 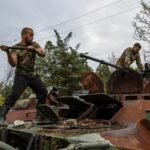