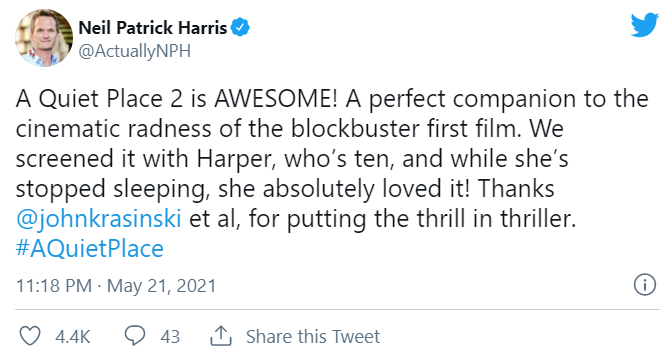 In yet, another indication that the domestic box office is resuming normalcy, online ticket store Fandango has provided information on advance ticket sales for Paramount’s long-awaited sequel A Quiet Place Part II, which opens on May 28 with Disney’s Cruella.

Interesting parallel here with A Quiet Place Part II presales, which market forecasts have estimated at $40M-$50M over four days. Remember that the sequel, directed by John Krasinski, was supposed to be released on March 20th. On the week of March 8, the universe started to recede from Covid.
A Quiet Place Part II advance ticket went on sale in early March of las

t year. According to Fandango, A Quiet Place Part II is selling twice as many advance tickets on its website and app as it was at the same stage in the 2020 distribution period until the film was dropped off the release calendar due to theatre closures.

The film has received positive reviews from the start, with a 92 % Tomatometer score on Rotten Tomatoes.

“Strong presales for A Quiet Place Part II on Fandango may offer another sign of a potential domestic box office turnaround, especially as we approach Memorial Day weekend, the official start of summer movie season,” says Fandango Chief Commercial Officer Kevin Shepela. “Even if some theatres are still running at limited capacity, the Fandango pre-sales enthusiasm is encouraging.”

“This is the kind of event that theatres were designed for,” says Fandango Managing Editor Erik Davis. “Audiences who have been anticipating the release of A Quiet Place Part II on the large screen for a long time need not be disappointed.”

According to exhibition reports, with Regal’s latest reopening of 174 locations today, bringing the circuit’s reopening rate to 96 %, the percentage of 5,8K domestic theatres in service rises to 71 %. Canada, on the other hand, is also dealing with Covid and has the major provinces of Alberta, Manitoba, and Ontario under lock and key.

It’s now looking like they’ll reopen in July, gulp. Maryland declared on May 15 that all companies will reopen with no capacity limits. By June 11, there will be no space limits in Washington, D.C. movie theatres. The Memorial Day weekend seems to be ideal for Massachusetts movie theatres to be fully booked.