The family of 14-year-old John Hilgert filed a lawsuit Wednesday against Travis Scott after Hilgert was killed during Astroworld music festival.

“No one should die going to a concert,” attorney Richard Mithoff said in a statement to a news agency.

“The pain of our loss from our son John not making it home alive from an event such as this is intolerable,” Mr. Hilgert told Fox26. “He was a beautiful young man who simply wanted to enjoy his first concert event with friends, whom he treasured spending time with more than anything else.” 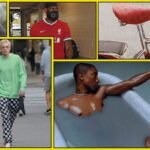