Top-notch singers Billie Eilish, Taylor Swift, BTS, Cardi B and Dua Lipa will perform in the 63rd Grammy Awards ceremony, according to the lineup of performing artists announced by the Recording Academy. 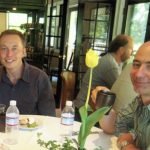